TCL Electronics will run an integrated brand campaign across multiple online and offline channels during IPL 2019 season. 423 million viewers had watched matches during the second week of IPL 2018 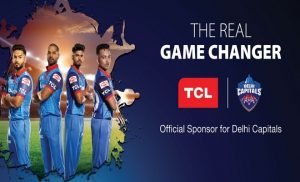 Consumer Electronics company TCL Electronics has announced that it has tied up with Delhi Capitals IPL (Indian Premier League) Team. The China-based company is now the official sponsor of Delhi’s IPL Team for the upcoming IPL season.

Interestingly, Vivo is the official partner for IPL cricket tournament in India. Tecno Mobile had also recently announced its partnership with Punjab’s IPL Team for the 2019 season.

Mike Chen, TCL India Country Manager, said, “As one of the biggest sports hubs in India, the Delhi/NCR region has a massive base of cricket fans devoted to Delhi Capitals. Our decision to partner with the T20 team, however, is influenced by more than just the end-consumer reach. Both TCL Electronics and Delhi Capitals have distinguished brand legacies and are known to be game-changers and pioneers in their respective domains. This mutual core synergy is why we have tied-up with Delhi Capitals as a team sponsor.”

TCL to run brand campaigns during the IPL season

During the two-month long tournament, TCL Electronics will also run an integrated brand campaign across multiple online and offline channels. As part of the campaign, the brand will also launch new products and categories to the Indian market, and promote its current offerings across various channels.

This will include social media engagement, on-ground activation campaigns, strategic website banner placements, and a ‘Cheer for the Brand’ selfie contest, as well as a recognition of ‘Best Fan Moment’ in collaboration with Delhi Capitals.

Chen added, “Having emerged as a game-changer in the consumer electronics space, we will further leverage the mileage from this association to introduce new products and categories to TCL’s portfolio for the Indian market. We will be looking to further build on our India-first approach and bolster our emphasis on creating products ‘for the people, by the people, with the people’.”

Dhiraj Malhotra, CEO, Delhi Capitals, said, “We are delighted that a top global brand such as TCL Electronics has come on board as the team sponsor for Delhi Capitals. As a team, we aspire to engage, delight, and entertain cricket fans across the country. The association with TCL will help us elevate that engagement to another level through novel cross-channel initiatives.”

Crompton Greaves Introduces Fan Made For Use in Kitchens

Foxconn to Start Making iPhones in Chennai from Next Year

Foldable Phones to Account for Five Per cent of High-End Phones...