Voltas is retailing ACs and Voltas Beko range of home appliances through these stores. The first one was opened in Faridabad, Haryana in October 2018 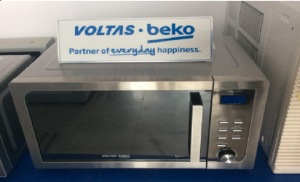 Pradeep Bakshi, Managing Director and CEO, Voltas Limited, had said, “We are delighted to announce the launch of the Voltas Beko Home Appliances range for all our valued customers. As a market leader in the AC category, Voltas has always placed customer centricity at the core of all its offerings.”

It is to be noted here that apart from its range of ACs, Votas is also promoting Voltas Beko range of home appliances in all of these stores. Beko, a Turkey based home appliances company, had entered India in 2018.

Noel Tata, Chairman, Voltas Limited, during the launch of Voltas Beko home appliances, had said, “This new venture allows us to offer a wide variety of globally renowned products in the Indian market. Arcelik is a market leader in Europe and is on the cutting edge of innovation in the consumer durable segment. Voltas has established its credentials as a market leader in the AC segment with wide distribution reach and has strong brand recall. Together, we hope the Voltas Beko products will become an integral part of every Indian household.”

The company claims that it has launched more than 100 SKUs (Semi Knocked Units) during the last three months in India. These include 44 SKUs of refrigerators, 40 SKUs of washing machines, 12 SKUs of microwaves/ovens and 7 SKUs of dishwashers.

Bakshi commenting about Voltas Beko home appliances had said, “Voltas Beko has been built on the same principle, aiming to provide best in class products as ‘Partners of Everyday Happiness’. In sync with the government’s ‘Make in India’ initiative, by FY’20 we will be manufacturing these products in the facility at Sanand, Gujarat.”

As per several industry reports, the consumer durable market in India is slated to grow at 10 to 12 per cent per YoY. During the last 10 years, the Indian Major Domestic Appliances market grew by nearly nine per cent, surpassing the overall three percent growth of global white goods market.

Voltas, in June 2018, had announced that it had started working on Voltas Beko’s first manufacturing facility in India. The facility is being developed at Sanand industrial hub located in Gujarat.

An official statement released by the company read, “This manufacturing facility will be one of the first white goods appliances unit in the State of Gujarat, creating an OEM base for home appliances in the region along with local employment opportunities. The choice of Gujarat as the destination for the manufacturing unit was due to State’s ‘ease of doing business’, and ‘good governance’.”

Samsung was the First to Introduce a Triangle Design Inverter AC:...