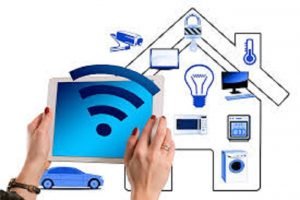 2018 was a year that saw a lot of technological advancements in the field of consumer electronics. From launching devices that could easily connect to one another over a wi-fi network, a consumer electronics company even launched a robot vacuum cleaner that cleans on its own, charges on its own and can remember a home’s carpet area.

How? The answer in simple words is IoT. It seems as if 2019 and the years coming after that are going to be the years dominated by consumer electronics with embedded IoT features. It is worth mentioning here that almost every air-purifier, AC, smartphone and TV launch in 2019 has mentioned smart features in one way or the another.

Gunjan Srivastava, MD and CEO, Bosch and Siemens Household told Electronics For You that embedding IoT or smart features in home appliances is BSH’s new strategic direction. He said, “Bosch and Siemens will be bringing in a lot of connected products to India in the next two to three years. We have been doing a lot of testing and will continue to do it for next 12 to 18 months to check the performance, usability and the feedback we get in the country.”

Song Dae-hyun, president of LG Electronics Home Appliance and Air Solution Company, recently said, “Our aggressive strategy and drive for excellence will bring voice-enabled AI to more homes this year than any other manufacturer and this is something we are immensely proud of.”

Haier recently added facial recognition feature to its service app in India. Eric Braganza, President, Haier India, said, “We are committed to creating a seamless and hassle-free service experience for our customers throughout their product journey with us by strengthening our capabilities technologically. We are thrilled to be the first in the industry to introduce the facial recognition feature in our service engineer mobile applications.

What makes IoT so popular

It is hard to define IoT as a single concept. For automobile brands the definition is different than what it is for consumer electronics brand. The applications and dimensions are different as well, but what’s seems to be common is the ease it adds to doing a task.

IoT, put in simple words, has the potential to turn cars autonomous, deliveries automatic and consumer electronics smart. Faisal Kawoosa, founder, Techarc, explains, “I think credit goes to smartphones which has increased the tech acceptability among users. Traditionally tech was seen something out of our lives. Users are now becoming acceptable to see how tech can change other areas, beginning with the consumer electronics. People see ‘smart’ tag adding value in their lives. The value brought by IoT is always in terms of convenience, efficiency and utility.”

Kawoosa also feels that people are attaching smart products in their lifestyle as a fashion statement. He added, “Some people also associate with latest tech to be seen in Vogue, it’s a fashion statement, lifestyle measure for them. Now, clothes and tech are two things seen as measures of lifestyle.”

Increasing internet penetration can also be termed as a contributing factor to the widespread expansion of IoT enabled consumer electronics in India. Bain and Company’s ‘Unlocking Digital for Bharat: $50 Billion Opportunity’ report read, “India has the second-highest active Internet users, with about 390 million residents who use the web at least once a month. The country has also experienced the highest increase in internet users, with an average of 40 million beginning gaining access each yet. Further, mobile data use (~8 GB per subscriber each month) has reached the level of developed markets.”

The present is ‘smart’

Majority of new product launches that Electronics For You has covered since the beginning of 2019, have been in the smart products category. Be it TV, ACs or speakers, almost every brand has launched more than one product boosting smart features. Bluetooth Mesh, one of the most commonly used smart connecting technologies, has become almost common in the portable speaker’s segment.

Ottomate, founded by Lava’s co-founder Vishal Sehgal, has even launched a smart fan based on the Bluetooth Mesh technology. Sehgal, in a recent interaction with Electronics For You had said, “Smart fan is just our first offering. Once we see the adoption of Bluetooth mesh technology grow, we are planning to introduce an entire ecosystem of smart products. The potential for IoT in India is huge. Once we identify the right technology to enable it, the possibilities are endless.”

Xiaomi, one of the fastest growing consumer electronics brands in the country, is so bullish on the use of smart features that it has not launched even one non-smart TV in India. In fact, the company, time and again, have said that it is not at all working on any non-smart products in its portfolio.

Rajeev Bhutani, Samsung India’s SVP for Consumer Electronic Business, recently told Electronics For You, “In India, most millennials view IoT as an enabler for connected living. According to the research, domestic automation appears to be an essential for today’s consumer, since bulk of consumers believe that IoT is all about, smart homes having connected devices and smartphones. The Indian market is constantly growing in terms of wearable technology, with IoT applied in fitness, healthcare, lifestyle and infotainment sectors.”

The future is ‘smarter’

A recent report by Nasscom has forecast the IoT market in India to reach a value of $15 Billion by 2020. Counterpoint Research, in one of its recent reports, has forecast that sales of AI smartphones will increase to 1,250 million units in 2022 from 190 million in 2018, representing more than three-quarters of all smartphones shipping in that year.

Counterpoint’s report read, “At present, AI is being used mostly for camera-related applications (facial recognition, image enhancement, and more). However, Counterpoint Research expects to see AI being used extensively for a raft of other applications over the next two years.” It also pointed out that smartphones with dedicated AI hardware will clearly be at an advantage in the future.

Another report by Market Future Research has forecast the global IoT in consumer electronics market to reach a value of USD $120 billion by 2023. Riversong, which is one of the newest consumer electronics brands in India, had recently told EFY-ACE that the prime aim of the company is to be a smart devices company in India.

Avneet Singh Marwah, CEO, SPPL, Brand Licensee of Kodak TVs in India, told EFY-ACE, “The smart TV market share in India is much bigger than the normal TVs market share. Though the bigger share is enjoyed by the online channel, the day is not too far away when the offline channel will also enjoy an almost equal share of smart TV sales and shipments.” Marwah is also of the view that Smart TVs will completely replace normal TVs soon.

Why are Amazon and Google Collaborating in the Video Streaming Space?

CP Plus Aims to Increase CCTV Exports From India