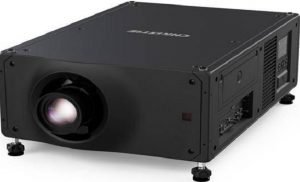 Christie announced that its visual solutions have been deployed for the projection mapping showcase on the newly-inaugurated Statue of Unity dedicated to visionary Indian statesman Sardar Vallabhbhai Patel. Dubbed as the world’s largest statue, Prime Minister Modi had inaugurated it three days ago.

Sean James, executive vice president, enterprise and entertainment, Christie said, “We are absolutely delighted that the Christie Crimson Series has been chosen to illuminate the Statue of Unity, which is a symbol of India’s unity and integrity and a fitting tribute to one of India’s most respected statesmen in modern times. Over the years, Christie has built a solid reputation for delivering numerous large-scale projection mapping projects in India. We currently own 90% of the market share for permanent projection mapping installs in India, and 80% of the market share in India in terms of the deployment of projectors above 10,000 lumens.”

Largest ever deployment of high-brightness projectors in India

The company claims that the amazing spectacle was accomplished by Christie’s Indian partner Pyramid Technologies and German laser show producer HB-Laser. A total of 51 Christie Crimson WU25 3DLP laser projectors are being used in the lightning show.

Ajay Parwaney, managing director, Pyramid Technologies said, “When it comes to challenging projects in India, Christie has been the preferred choice for projection solutions due to its excellent track record in terms of performance, reliability and service support. We are honored to be involved in this monumental project from the conceptual stage, during which we participated in a detailed projection study that resulted in the Crimson Series emerging as the preferred choice of projectors for the projection mapping showcase on the Statue of Unity.”

A number of reasons that explain the selection of Christie Crimson as preferred partners for the lightning and sound show around the Statue of Unity include IP5X-seal, solid-state laser light source in a rugged and compact chassis, and their ability to provide years of maintenance-free operation.

Parwaney explained, “These specifications are important to the client as the required projection systems need to withstand inclement weather conditions. On top of that, the availability of the longest throw lens that can project bright and vivid images on this 182-meter high statue was another major reason why the Christie Crimson clinched the job for this project.”

The Christie Crimson Series further boosts tough built quality and easy to ship features. Company claims that installing these is easy as these are compact and offer quiet operation with 360-degree orientation.

ZTE Phones Drop 48% in US Prepaid Market in Q3