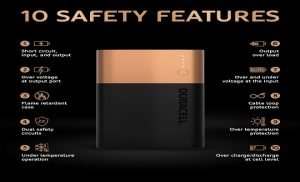 Duracell, one of the leading alkaline battery manufacturers has announced launch of its power banks range in India. The range slated for launch on 10th October 2018 will be exclusively available on Amazon India for the first six months.

David Abraham, Duracell marketing director for Middle East and India, said, “In launching Duracell power banks in India, we are catering to the needs of the consumer living in today’s fast-paced world and constantly multi-tasking on their smart phones. Our new mobile power bank empowers consumers to get on with their busy lives, without worrying about their phones losing its charge. The Duracell power bank also sports multiple security features to keep safety as priority.”

Compatible with android, apple and other USB-powered devices, Duracell power banks will provide users with 2X charging speed claims the company. All the Duracell power banks in India will be covered under three-year warranty and feature company’s trademark copper top design.

The company also claims that their power banks will protect users and their smartphones against short circuit and will sport a flame-retardant case. Duracell power banks will come equipped with dual safety circuits and will also offer protection against over temperatures said the press release.

Duracell has really made a very strategic move by launching these power banks just before the festive season in India. Moreover 10th October 2018, the date set for the launch falls right in tandem with Amazon’s ‘Great Indian Festival’ days. The move accompanied with right pricing may help Duracell generate a lot of interest in Indian consumers. It is a known fact that many Indian organizations and individuals prefer gifting such accessories as Diwali gifts to their employees and loved ones.

The company will face tough competition as the country is flooded with power bank choices available to consumers in form of Mi, Samsung, Lenovo, Ambrane, Intex and many other renowned brands.