Home Consumer Electronics & Appliances India likely to be among first few countries where Panasonic will launch...

India is likely to be among the first few countries where Japanese appliances manufacturer Panasonic India will launch an “invisible” TV. The company has already developed a prototype which was showcased at an event in India on Monday. But consumers will have to wait. 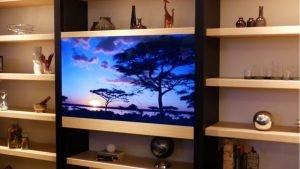 The Japanese TV maker won’t be able to launch the product, which they call the world’s first invisible TV—a glass pane that turns into a television, for the next two years at the very least.

Manish Sharma, president and chief executive officer at Panasonic, India and South Asia notified that it’s too premature to say anything about the product as of now. But India definitely will be one of the first few countries where we will launch the product.

Sharma added that the cost of the new product cannot be ascertained as of now. However, it will definitely be placed in the premium range of products. Sharma was speaking on the sidelines of the launch of Panasonic’s 2017 line-up of 4K ultra high-definition television sets.

India is also expected to rank fifth in the consumer durables market in the world by 2025, according to a study by Consumer Electronics and Appliances Manufacturers Association (CEAMA) and consulting firm EY.