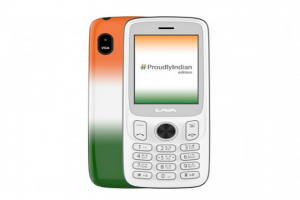 Lava has launched limited edition phone Lava A5 Proudly Indian Edition for Republic Day. It has priced the phone at Rs 1,449 and the phone will come with a tri-colour back cover. Lava says that the phone features Super Ultra Tone Technology.

The phone comes with a 6.09 cm (2.4-inch) QVGA display and dual SIM support. It is powered by a 1000 mAh Li-ion battery which supports super battery mode. The battery lasts up to three days with a single charge says Lava. The phone has 32GB of internal storage.

The phone has the option of auto call recording along with call blink notification. It supports incoming texts in 22 languages. It also allows users to type in seven languages like English, Hindi, Tamil, Kannada, Telugu, Gujarati and Punjabi.

The Lava A5 Proudly Indian phone has a primary camera with zoom and video recording feature. It also has features like instant torch, wireless FM with recording, USB connectivity, and Bluetooth.