With Microsoft’s surface headphones, now you can control the volume levels and cancel noise via on-ear dials and adjust the sound as per your environment 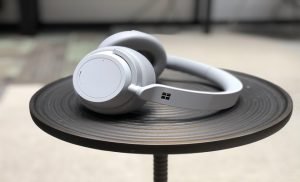 Microsoft has launched its first surface headphones with an all-new feature of noise cancellation. Slated to go on sale by the end of this year, the latest headphones were released alongside Microsoft’s Surface laptop series – Surface Pro 6, Surface Studio 2, Surface Laptop 2.

Priced at $349, the surface headphones are equipped with a noise cancelling feature that allows its user to cancel noise levels using the ear dials, thereby providing an uninterrupted audio experience. It can also be connected to smart devices via Bluetooth. It comes with13 levels of ambient noise control and two beamforming microphones on the ear cups to let the user attend just to the sound of his/her choice.

The earcups come with rotating rings – the right ring lets volume adjustment while with the left ring, one can scroll through the 13 noise cancellation levels. Microsoft’s surface headphones are enabled with Cortana which, as usual, will speak back to one’s command or question. It has claimed a battery life of 15 hours and automatically pauses music when taken off.

In line with the headphones, Microsoft has also released its Surface laptops series. Surface Pro 6 comes with the eighth generation Intel Quad Core processor. It claims to be 67 per cent faster than the fifth generation Surface Pro and has been reformed to keep up power. It also has PixelSense Touch Display that works best with Office 365 on Windows.

Surface Studio 2 is high-graphics performance-based and fast processing laptop with50 per cent faster GPU. It is 85 per cent faster than the original Surface Laptop and is also powered by the new Quad-Core eighth generation Intel processor.