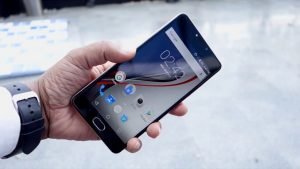 Manish Sharma, President and CEO, Panasonic India and South Asia, and Executive Officer, Panasonic Corporation mentioned that with the launch of Panasonic’s first AI-enabled smartphones, the company is now expanding their product offerings which will help empower their consumer base and assist them in performing tasks in a smarter way.

He further notified that AI has been dubbed as the technology which in future will shape the product interface and the way humans interact with their smartphones. With this pilot advancement Panasonic hopes that this will not only enhance their market share but will also further strengthen their position within the industry.

The 5.2-inch full-HD IPS display carrying Eluga Ray Max is powered by 1.4GHz 64-bit octa-core Qualcomm Snapdragon processor paired with 4GB RAM and comes in 64GB and 32GB internal memory variants that can be expanded up to 128GB. The device sports 16MP rear camera, a 8MP front camera with selfie flash and is also equipped with a finger print sensor in collaboration with ‘Android for work’ feature. It houses a 3,000mAh battery with Qualcomm Quick Charge 3.0.