Smartron, which is an India-based electronics and IoT company, has launched its new smartphone called srt.phone in India. Sachin Tendulkar, who is Smartron’s ambassador and investor, unveiled the srt.phone, which is priced starting 12,999 for 32GB storage variant. The 64GB option costs Rs 13,999. 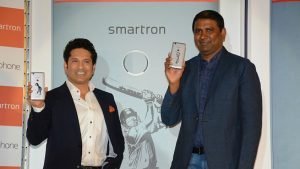 No cost EMI for srt.phone starts at Rs 1167 per month. Additionally, users will get one-year of t.care extended warranty worth Rs 1,499, for free with srt.phone.

Previously, Smartron launched its mid-range flagship phone called t-phone, in India. It is priced at Rs 24,999.Smartron srt.phone will feature a 5.5-inch Full HD display with a resolution of 1920 x 1080 pixels. It comes in two storage variants, one with 4GB RAM+32GB ROM and another with 4GB RAM+64GB ROM. It supports unlimited storage with tronx platform. The device will be powered by a Qualcomm Snapdragon 652 processor.

Smartron’s ambitions are to launch IoT devices, high-end computers and smartphones, which are made and developed in India. The company has R&D centres in Bangalore and Hyderabad.Smartron’s mobile division is now being lead by Amit Boni, who was previously looking after Motorola’s India operations.