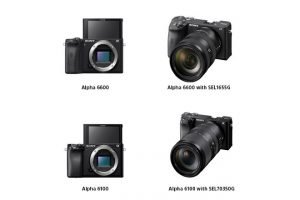 “Our ‘One Mount’ strategy to continually expand the E-mount system, cameras and lenses with complete inter-compatibility between full-frame and APS-C, means that we want to offer the widest range of exciting products that customers can select from, when choosing the right tool for their needs,” said Hiroyuki Tokuno, Head of Digital Imaging Division, Sony India.

Tokuno added, “The APS-C market is extremely important to Sony and the Alpha 6600 and Alpha 6100 are both cameras that pack-in the very latest technology breakthroughs and whether you shoot stills, video or a combination of the two, we are confident that users will be very happy with the results.”

The company says that the new Alpha 6600 has been designed to address the needs of the most demanding photographers and videographers with its versatility, making it suitable for multiple types of shooting scenarios and users. The Alpha 6100 is targeted at users who are looking to make the step-up to shooting with interchangeable lens cameras and wish to shoot high-quality photos and videos in a variety of different situations.