Xiaomi claims that the Mi Mix 3 will be world’s first smartphone with a 10GB RAM. It also features a retractable camera 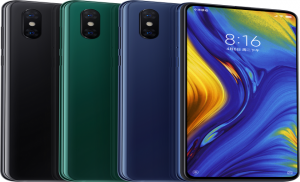 Lei Jun, Chairman and CEO of Xiaomi at the launch event revealed that Xiaomi Corporation expects its shipment of smartphones to exceed 100 million units by the end of October 2018, successfully reaching the full-year target set at its global core suppliers conference on 13 September 2017. Xiaomi will reach the target two months ahead of schedule, and it exceeds the unit shipment of 90 million in 2017.

The smartphone sports a 6.39-inch AMOLED display with a screen resolution of 2340x1080p. Xiaomi has claimed that Mi Mix 3 will offer highest-screen to body ratio among flagship smartphones. Mi Mix 3 will come installed with Android 8.1 Oreo.

Xiaomi claims that the camera setup on Mi MIX 3 achieved a DxOMark photo score of 108 which ranks among the world’s best smartphones for photography.

Xiaomi, for the first time has added a dedicated AI button at the left side of the Mi Mix 3. Users in China can wake the Xiao Ai voice assistant by holding the AI button and customise one-click and double-click to perform different functions.

Every Mi Mix 3 smartphone in China will be shipped with a 10W wireless charger that Xiaomi claims is 30 per cent more efficient when compared to its predecessor.

Xiaomi has not clarified its plans of launching the Mi Mix 3 in India. However, the Chinese brand is thinking of introducing the smartphone in Europe soon.