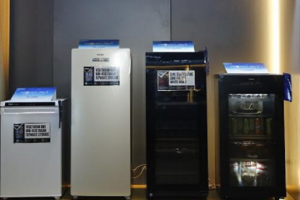 Haier has launched 83 products across categories like refrigerators, air conditioners, washing machines, LED TVs in India. It also announced its plans to lead the IoT era in the home appliances industry.

The company said that it aims to strengthen its customer base through an extensive retail network of large format stores, multi-brand outlets and a strong dealer network across India. It already has a network of 20,000 dealers across the country. Out of this, around 2,000 are direct dealers and 18,000 are indirect.

Haier also talked about providing strong after-sales services to its customers through its large service footprint in the country. It has over 539 service centres, including Haier Exclusive Service Centers (ESCs), Authorized Service Centers (ASCs) and Direct Service Centers (DSCs) in more than 19,000 pin codes across India.

Out of the 83 products launched, it unveiled its IoT enabled T-Door Fridge with an in-built smart LED screen. The company aims to create an Internet of Food Ecosystem by adopting industry-leading connectivity technology with this product. The display screen installed on the door of the refrigerator is Wi-Fi enabled and comes with other smart applications like will create a connected ecosystem in the house.

Focusing on the energy efficiency as per Bureau of Energy Efficiency (BEE) norms, Haier has converted its entire frost-free range of refrigerators to Twin-Inverter Technology as per the company. Haier has also focused upon 27 new models in different segments with 21 in Small Direct Cool segment, five in Big Direct Cool segment. The small DC single door refrigerator will have space management available in 171, 182 and 192 litres capacity with 2/3 Star ratings as per new BEE norms 2020. The Big DC range is the company’s first in the inverter range of single door refrigerators. It provides up to 40L more fridge section than any conventional top mount refrigerator of the same capacity claimed Haier.

Eric Braganza, president, Haier Appliances India said, “The home appliances industry has ushered in an era of IoT and new technologies where customers are looking for products that provide a connected and a holistic new age experience . At Haier, we are committed towards delivering products that seamlessly align with our motto of Inspired Living and adds convenience to the everyday lives of users.”

This summer, the company will also launch 29 new air conditioners. It is augmenting its PuriCool range of ACs this year, with the launch of an upgraded version. It said that other than the in-built ifD air purifier, the new 5 star rated range is Wi-Fi enabled and comes with voice assistance.

Haier has announced eight new SKUs in the washing machine category. It includes the Front Load Smart Washing Machine with the Super Drum. The washing machine is Wi-Fi enabled with the drum size of 595mm. It comes with a 10kg washer and 7kg dryer which saves time by up to 55 per cent said the company. It is also equipped with Direct Motion Motor technology.

The company has also launched its another Wi-Fi enabled Front Load Dual Drum Washing Machine. It can be operated through Haier Smart Home App and allows the user to wash independently in two different drums at same time.

The company has also launched six new models of water heaters. The range comes installed with a manual and digital panel. It said that the brand 10 new variants in the category with Wi-Fi enabled option in Golden Spray ABS outer body. Haier also unveiled two new variants in the microwave segment. It includes a 25litre convection in mirror glass finish and 30ltr convection (HIL3001CBPH) in floral finish.

Hisense to Launch the Next Gen Refrigerators Via Online Channels

LG Grants Use of its Advanced Fridge Tech to GE Appliances