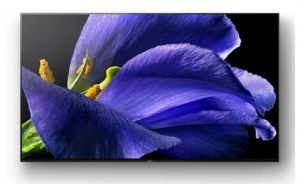 These new 4K TVs from Sony feature speakers built in inside the screen itself. Sony calles it the acoustic surface audio+ technology. Company’s official statement read, “Sound comes directly from the screen in the Master Series A9G. Sound-from-Picture Reality faithfully reproduces the position of the sound on the screen so when actors are speaking, the sound appears to be coming directly from them and not from a speaker at the bottom of the screen.”

It continued, “Acoustic Surface Audio+ with two actuators and two powerful subwoofers deliver multi-dimensional sound that immerses you in a captivating audio-visual entertainment experience. In addition, a TV Centre Speaker Mode provides choice to use the TV as the centre speaker when utilising a home theatre system to unleash an immersive cinematic experience.”

Sony’s official statement read, “On A9G you can also experience the cinema thrills with Dolby Vision that brings scenes vividly to life for authentic viewing, while Dolby Atmos fills the room with immersive surround sound. In addition the TV comes with eARC HDMI input to connect and enjoy Dolby Atmos content on supported audio devices.”

Company’s official statement read, “Sony Android TVs will be compatible with Apple AirPlay 2 and HomeKit. AirPlay 2 lets you effortlessly stream content from your iPhone, iPad and Mac right to your Sony TV. HomeKit lets you easily and securely control smart home products using the Home app or by asking Siri on your Apple devices. TVs can be added to the Home app and included in scenes or automations with other HomeKit accessories.”