The IHS Markits report said that Samsung’s negative growth from 2018 has spilled into 2019, with the company’s shipments declining 9 percent year-over-year in the first quarter 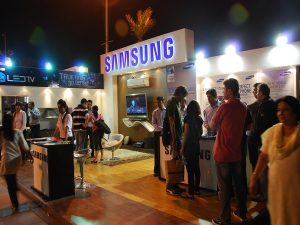 Jusy Hong, research and analysis director, IHS Markits said, “Samsung Electronics maintained the top rank in the smartphone market in terms of volume with shipments of 70.8 million units during the quarter. However, the South Korean company was not the biggest story of the quarter.”

Hong added, “Instead, the headliner was China’s Huawei, which shipped 59.1 million smartphones in the first quarter. This almost matched Huawei’s strong performance in the fourth quarter of 2018, when the company shipped 60.5 million units. The company’s shipments were up 50 percent year-over-year, making Huawei one of just three OEMs posting growth during the past quarter.”

Huawei’s performance is particularly impressive in light of the headwinds the company faces from the United States and other countries regarding 5G network roll-out activity. The company continues to expand in Europe, the Middle East and Africa, growing by more than 60 percent in the region. Moreover, Huawei is continuing to lead in its home market, shipping 30 million units in China, up 42 percent year-over-year.

Gerrit Schneemann, senior analyst, IHS Markit, said, “With its Huawei and Honor brands, Huawei has been able to deliver new design configurations in 2018 and early 2019 that allow it to offer features preferred by users, such as enhanced camera capabilities. In Europe, Huawei is now a well-established brand, competing on even footing with Samsung and Apple in the high-end, while expanding into other price segments as well. Huawei is continuing to successfully separate its network business challenges from its consumer-devices business unit.”

Hong added, “Huawei, in contrast, saw its market share reach 18 percent, the highest share ever, up from 11 percent a year ago.”

For Samsung, it will be important to continue pursuing its strategy from 2018 and focus on integration of new and innovative technologies in broad parts of its portfolio. Effective competition with Chinese OEMs will rely on fast execution and nimble adjustments.

Schneemann added, “The fourth quarter likely left Apple with excess inventory, creating an incentive for the company to use more generous trade-in offers and more financing options in as many regions as possible. While slightly reducing prices in China might encourage some buyers, Apple faces the underlying challenge of charging premium pricing in a maturing smartphone market. As a result, Apple may not be able to find short-term fixes for its problems.”

Vivo shipped 24.3 million smartphones during the quarter, up from 21.2 million units in the first quarter of 2018. The company’s 14 percent year-over-year growth was the second highest shipment increase after Huawei.

OPPO, on the other hand, saw shipments decline to 25.2 million units, down 3 percent from 25.9 million units during the first quarter of 2018.

Xiaomi remains under pressure from OPPO and Vivo. During the quarter, Xiaomi shipped 24.7 million units, down from 29.3 million units in the first quarter of 2018 — a 16 percent decline year-over-year. India continues to play a central role for Xiaomi’s business outside of China. However, OPPO and vivo are also expanding in the country. In OPPO’s case, a greater focus has been placed on expansion in Europe and India than previously.

For many other smartphone brands, business conditions continue to be difficult, with few signs of a silver lining on the horizon.

LG continues to struggle with its mobile handset business unit. The company’s latest flagship devices lack differentiation, and as a result, they continue to be lost among the sea of new models. Tecno, a popular smartphone brand in Africa, is now facing severe competition from Huawei in the region.

Hong said, “The roll-out of 5G handsets began in the first quarter, but they arrived too late in the quarter to impact results. Furthermore, only a few handsets are currently available to consumers in markets where 5G networks have launched. The activity surrounding more 5G network launches will continue throughout the year, but first-generation 5G handsets are premium devices, a pricing segment already testing the limits of consumer acceptance.​”

Samsung and Lava Gain in the Feature Phone Market: Report