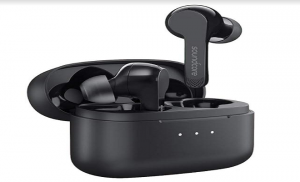 Apple will continue to dominate the hearables market as per a recent report published by Counterpoint Research. However, Samsung, Huawei, and traditional wireless headset manufacturers will also row alongside new entrants.

The report read, “The upcoming second-generation of AirPods and similar earbuds from other technology giants will be the catalyst for market growth. It is based upon the premise that the penetration of wireless hearables among global smartphone users will keep increasing along with the view that Apple will aggressively drive this business to offset declining smartphone sales.”

It is to be noted here that Apple’s AirPod sales were estimated at around 35 million units accounting almost three-fourths of this emerging segment last year, according to another research by Counterpoint. The report also said that Samsung, Bose, Jabra, Huawei, Bragi and LG are also prevalent and will grow from a smaller base from last year. New entrants such as Google and eventually likes of Amazon, Plantronics will drive the market forward.

2019 will be the year of hearables

Peter Richardson, Research Director, Counterpoint, said, “2019 will be the year that hearables evolve into an important market. During the year, major technology companies are expected to drive innovations in true wireless hearable devices.”

He added that a rise in discretionary incomes of consumers and evolving digital habits are expected to propel the demand for hearables across the world as well. The global market for true wireless hearables, as per the report, is expected to reach US$27 billion in terms of value by 2021.”

Highlighting the potential of hearable devices, Liz Lee, Senior Analyst at Counterpoint Research said, “Hearables have the chance to be a part of a future where information and connectivity are integrated into our daily lives more than ever. Above all, personal voice assistants such as Apple Siri, Google Assistant, and Amazon Alexa are likely to boost the market from 2019. Future generations of hearable devices will be able to accommodate virtual personal assistants and used for a multitude of tasks such as queries and hands-free directions. Ultimately, advanced hearables can reduce smartphone use, as they may take over many tasks that users solve with the help of their smartphones today.”

Commenting on the technology trends, Liz Lee added, “As the trend among modern hearables is going towards physical miniaturization while maximizing functionality and user experience, opens up many exciting capabilities to be integrated into future hearable devices. These include in-ear intelligent assistants to control devices and tasks around you, to act as smart hearing aids, real-time language translation, tracking your vitals and more.”

The growing market will benefit not only content, applications providers but also component vendors looking to scale beyond the saturated smartphone markets. The key component players who will benefit include Li-ion (Lithium Ion) battery suppliers, microphone, sensors, speakers and chipset providers as manufacturers seek to offer optimal performance in terms of audio, sensing and above all battery life.”

While the hearables segment is a potential growth market for the entire industry from component suppliers to brands, it is important to understand the consumer attitude and preferences towards this emerging segment. Counterpoint Research recently conducted a comprehensive consumer study of existing and potential hearables buyers in the United States, one of the biggest initial markets for hearables.

Hearable Type and Brand Preferences – It is not surprising that wired earphones/earbuds have been the most common choice up until now. However, the adoption of “wireless hearables” amongst premium smartphone users is increasing. Apple is a distinct leader with AirPods in the category of true wireless earbuds. Ease of use, comfort & fit, and portability were highlighted as the key reasons for choosing Apple AirPods over other wireless headsets.

Usage Pattern and Location of Use – Almost two out of three respondents listen to music for more than 40 minutes a day while one in every four respondents watches videos for an hour or more with hearables. Home is the most common place of use while leisure/fitness activities are the next most common use-case for hearables.

Future Purchase Preference – With advancements in multiple technologies, reducing the size of hearable devices and the mass adoption from smartphone brands, true wireless hearables are becoming more attractive to consumers. Over half of the respondents have the intention to buy Artificial Intelligence (AI)-based hearables in the future.

He added, “Use of AI in voice tech is emerging as a new user interface with the many new applications. Around three out of four people now consider it as an important feature for future hearables purchase. It is a new user interface which needs a totally new ground-up development approach by the ecosystem players to make it more user-centric and feature rich. We believe it will evolve as an open ecosystem similar to the touch interface, following the natural process of evolution. The platform with maximum touch points along with better user experience is likely to win.”