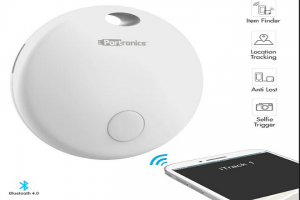 Company’s official statement read, “In today’s lifestyle with plenty of hustle-bustle, one might tend to lose or misplace any important valuables like wallets, mobile phones, and home or car keys. Considering the fact what if the young children or pets wander away in a park or in a shopping mall which can cause a tremendous amount of detrimental effect. For such situations/scenarios, Portronics has come to the rescue and has brought in, iTrack 1 device- a small, smart and reliable solution for such problems. iTrack 1 is a multi-purpose device that offers two-way anti-lost function, a key-finder function and a Remote-Camera Shutter function. One just needs to pair “TRACKFAST” app available on Play Store and App Store available for Apple or Android phones.”

It is to be noted here that Panasonic had also launched a similar product in India last year. Dubber Panasonic Seekit, the company is retailing the two variants of Seekit for prices for Rs 1,599 and 1,299 in the country. Portronics on the other hand has launched iTrack 1 at an asking price of Rs 699.

This first Bluetooth based tracker from Portronics uses Bluetooth to connect to a smartphone. Portronics claims that both the iTrack and smartphone start buzzing as soon as they are they are 10m apart from each other. It is compatible with iOS as well as Android devices.

iTrack 1 comes in white colour and it is dust and water resistant (IP67). Portronics itrack features as explained by the company through an official statement read :-

Object Finder Function: After pairing with Smartphone, one just need to physically attach iTrack 1 to any valuables like wallet, keychain, or handbags that you want to track (if lost). If the valuable is misplaced, you just need to press the “TRACKFAST” app button on your paired Smartphone and the device will start transmitting the audio signal.

Phone Finder Function: If you have forgotten/misplaced your phone or simply have started walking away from it forgetting to retrieve it up, iTrack 1 will alert you as soon as you move just 30 feet away from the phone. Or else, you can simply press the iTrack 1 button and the phone will start ringing even if the phone is in silent mode.

Anti-Lost Function: If your iTrack 1 device and your Smartphone are separated by more than 10 metres, they both will start buzzing, until they are brought in this range. However, to avoid irritating alerts in safe zones like your home, one can simply stop these alerts in such “safe zones”. This will prevent unnecessary buzzing if the distance between the two devices increases within the safe zone.

The phone has a “last location” record on the map after it is disconnected from the iTrack 1. It can connect with the phone automatically on background even the app was quit or swiped off from the screen.

The in-built battery in iTrack 1 can last over a couple of years. Battery CR2016 is easily available and replaceable. iTrack 1 pairs with your phone on Bluetooth 4.0 (Low Energy – LE). There is a very tiny speaker used for beeping when you using it to “find” lost things.

One of the fascinating features is you can use iTrack 1 for taking pictures or selfies by just pressing the button on iTrack 1 and the paired Smartphone will take the picture. It acts as a 10 metre long virtual selfie stick.

Truvison Turning its Focus Towards Speaker Market in India