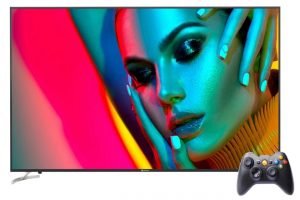 Motorola is all set to release a new range of Smart TVs on October 9th in India where the brand has partnered with Flipkart for the sales of its new television models. The launch event will be a digital one which will be live-streamed on Flipkart’s official YouTube channel. The key specifications of the TVs still haven’t been revealed.

Though, MediaTek has revealed that the TVs will be powered by its latest quad-core MediaTek MT9602 processor which features Arm Cortex-A53 CPU clocked at 1.5GHz and Arm Mali-G52 MC1.

“We are pleased to bring the new range of Motorola Smart TVs to market, powered by MediaTek’s innovative MT9602 chip – making it one of the most competitive Smart TVs in the country. Through this chip, Indian consumers will be able to enjoy the benefits of superior and advanced specifications, across both 4K and HD/FHD ranges, for the first time giving them a perfect festive season delight,” said Flipkart private brands vice president Dev Iyer in a statement.

This statement also confirms that the new range of TVs will have HD, Full HD and 4K TV models. These TVs are also said to be India’s first smart TVs to be powered by the Android 10 platform as well.

The MT9602 comes with support for up to three HDMI 2.1a ports, USB 2.0 support, and HDMI 2.0/1.4 with HDCP 2.2. It also has Dolby Atmos surround support. For better visuals, it has support for all basic HDR standards which includes the likes of HDR 10+. The processor also has support for codec standards such as AV1 and AVS2 for video streaming.