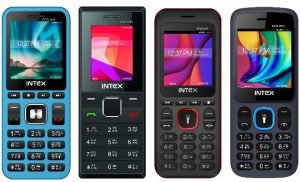 Intex has announced the launch of 10 new feature phones under Eco and Turbo series in India. These latest feature phones from Intex, as per the company, will be available to customers during the course of the next 10 weeks. Prices of these phones start from Rs 745 in India.

Commenting on the launch of Intex’s new feature phones, Intex Technologies director, Nidhi Markandey said, “To mark the coming new year, we wanted to give a wide choice to feature phone users and give them an impressive range to choose from.”

Feature phones under Intex Turbo series sport displays that are up to 2.4-inches in size. The Turbo range is inclusive of four phones namely – Turbo 108, Turbo 210+, Turbo G10+ and Turbo Slimzz. The Intex Turbo feature phone-book, as claimed by the brand, can hold up to 2,000 contacts. These phones come with an option to expand memory by up to 32 GBs.

Markandey continued, “Being a 22-year-old Indian company, Intex understands the needs and requirements of the consumers especially those residing in smaller towns and the hinterland. We have always striven to improve and empower the lives of people through feature-rich products and this new range of feature phones is the testimony to our commitment”.