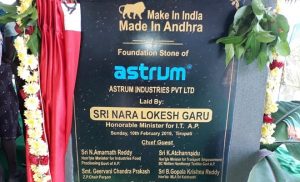 Astrum India has reportedly stared working on its Andhra Pradesh located manufacturing unit. The unit was announced after Astrum had signed a MoU with the Andhra Pradesh state government last year.

An official statement released by the brand read, “Astrum, performed its land breaking ceremony (Bhumi Puja) for its new production facility at Tirupati (India) led by Nara Lokesh, Minister of IT (Government of Andhra Pradesh) and Manoj Kumar Pansari, chairman and managing director of Astrum, among several other dignitaries.”

In accordance with the MoU with the Andhra Pradesh government, Astrum will develop the facility with an investment of over Rs 100 crores. A skill development center with an employment to approx. 2000 people will also be developed as part of the MoU.

Astrum’s official statement read, “Spread over 5.5 acres, the manufacturing facility is envisaged as part of the states rive to create a new IT Hub. The Government of Andhra Pradesh had signed an MoU with Astrum last year.”

This, as per the brand, is an initiative to bridge the employ-ability divide between the metros and urban cities, it will also provide an eclectic range of employment opportunities to the youth in the region.

Manoj Kumar Pansari, CMD, Astrum said, “This is indeed a big milestone for us. The choice of Andhra Pradesh as the destination for the new manufacturing unit is due to the state’s ease of doing business and growing focus on ‘Make in India’. We are happy to have laid the ground for the Astrum manufacturing plant here in Tirupati. This facility will also help us in expanding our manufacturing capabilities while increasing our reach in the Southern India.”