TCL, another consumer electronics company, had announced sponsorship for the team at the start of the current IPL season 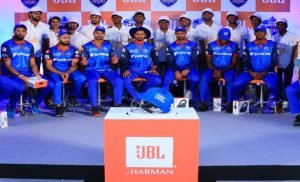 Samsung owned Harman has said that it has tied-up with Delhi Capitals IPL (Indian Premeir League) team through its audio brand JBL. It is to be noted here that Samsung had brought US based Harman in a eight billion dollars deal in 2017.

Company’s official statement read, “JBL is the official sponsor of Delhi Capitals team and has secured branding rights for the team’s merchandise and promotional activities for the ongoing season. This new partnership offers JBL an opportunity to reach and connect with millions of cricket lovers across the world.”

Sumit Chauhan, Vice President, Lifestyle Audio, Harman India said, “JBL is excited to partner with Delhi Capitals for this season of IPL T20 Cricket League. We play at the convergence of music, sports and culture and through this association, we will delight our fans.”

TCL, another consumer electronics company, had announced sponsorship for the team at the start of the current IPL season. TCL had said that it was looking to cement its leadership position within the Indian market by leveraging IPL’s massive reach and viewership.

The company has also extended its sponsorship contract to A.R Rahman’s ‘The Sunshine Orchestra’ project. This is the fifth consecutive year that the company has announced its association with this project.

“Harman and Kmmc have a common vision of providing the right platforms for deserving young musicians in India. The friendly match with Delhi Capitals was a memorable event for my students who were absolutely thrilled to play with their favorite sports stars,” said Founder, Harman and Kmmc, A.R. Rahman.

Chauhan added, “We are proud to work with KMMC and Dr. Rahman’s Foundation that works on training young musical talent in the country.”

Dhiraj Malhotra, CEO, Delhi Capitals, “It was a great event marking the partnership between JBL and Delhi Capitals.” Malhotra at the time of announcement of TCL’s association with Delhi Capital’s had said, “We are delighted that a top global brand such as TCL Electronics has come on board as the team sponsor for Delhi Capitals. As a team, we aspire to engage, delight, and entertain cricket fans across the country. The association with TCL will help us elevate that engagement to another level through novel cross-channel initiatives.”