According to the latest research from Counterpoint’s Market Monitor service, global smartphone shipments declined 2% annually in Q2 2018. Top 10 players now capture 79% of the market thereby leaving 600+ brands to compete for the remaining 21% of the market.

The weak smartphone demand is due to a slow-down in developed markets like China, US and Western Europe where replacement cycles are lengthening. Huawei became the top brand in a declining China market and captured the second spot in the global smartphone shipment rankings for the first time in a single quarter.

Commenting on Huawei’s growth, Tarun Pathak, Associate Director at Counterpoint Research said, “Huawei had a good second quarter in 2018 as it shipped more smartphones than Apple to capture the second spot in the global smartphone rankings, after 7 years of Apple-Samsung dominance. Huawei achieved this by launching smartphones in the premium segment and capturing the mid-tier segment with its fast-growing Honor sub-brand. Huawei with its Honor brand is offering a broad and refreshed portfolio at affordable price which is driving growth in the overseas market. Honor, which is already strong in the e-commerce segment, is now adopting a multi-channel strategy through branded stores in the South East Asia market. We expect store counts to increase in the future.” 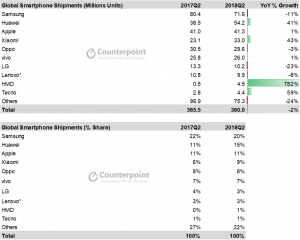 Commenting on the increasing trend of average selling price for major smartphone brands, Research Analyst, Shobhit Srivastava, noted, “Major Chinese brands like OPPO, vivo, Huawei are now focusing on increasing their ASPs through gradually upgrading their portfolio to higher price bands by bringing in features like Artificial Intelligence, bezel-less displays, dual cameras and with innovative industrial design and colors, materials and finishes in the affordable premium segment. Brands in the mid-tier segment now launch multiple variants of the same smartphone with different storage capacities, tempting customers to spend more on a higher spec’d device. This also helps drive sales by increasing the portfolio breadth as well increased margins by selling devices with a higher price point.” 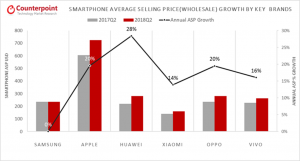 Molife Unveils a Made-in-India Smartwatch Sense 320 With Dedicated Sensors And...

Household Refrigerators and Freezers Market Likely to Exceed $125 Bn By...