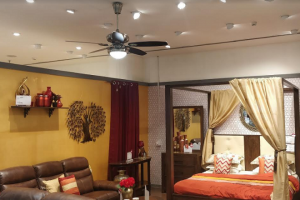 Fanzart is showcasing its fans range at six Home Town stores in India. Located in Bangalore, Mumbai, Kolkata and Bhubaneswar, Fanzart products will now be a part of Home Town’s endless aisle concept, where all 3D models of Fanzart fans will be available.

Company’s official statement read, “Being the first in its space, and also at the Hometown Stores, the strategic alliance, will make the Brand accessible to a large demographic who look for rarity, quality and refinement. Being the leader in creating fancy-designer fans that look stylish and artistic while still being efficiently-robust, Fanzart aims to evolve the ceiling fan in terms of design, functionality as well as aesthetics.”

The company had recently announced that it had signed up Bollywood actress Perizad Zorabian as its brand ambassador in India. Fanzart is also aiming to double its presence in the country by 2020. It is to be noted here that Fanzart caters to the SAARC as well as Middle Eastern markets.

Tarun Lala, executive director at Fanzart, recently told Electronics For You that the company is also planning to launch customisable ceiling fans in India. He said, “I think ceiling fans has been the most ignored consumer electronics vertical in India. Inspite of ceiling fans being present in almost every second Indian home, these have not been give the importance they deserve. Hence, Fanzart will allow its consumers to customise fans as per their taste and needs.” service will encompass designs as well as fan sizes.”

Parallely, Fanzart is also a part of the Future Group’s design and build team, at HomeTown. It is to be noted here that HomeTown stores are counted among the biggest showrooms of furniture in India.