The Korea based consumer electronics giant believes that most mobile content is viewed on vertical screens. Samsung has reported losses in its display panel business for Q1 2019 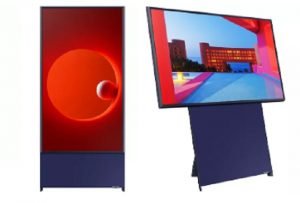 Samsung has unveiled a new TV named Sero that can be used both vertically and horizontally. Intended for users who are regular consumers of mobile content, the TV, in other words, can be called as a smartphone screen enlarger.

The company has showcased the TV in its home country South Korea along with Serif and Frame range of TVs. It is to be noted here that Samsung has reported losses in its display panel business for Q1 2019. The company has said that it is expecting high sales of TVs in the premium segment.

Samsung has plans to start retailing the Sero TV by the end of May 2019 in its home country. The TV will be priced somewhere around $ 1600 (KRW 1.89m). The pricing of the TV reveals that Samsung is looking forward to project it in the premium segment as well.

The company has not yet shown any intent of launching it in India. However, given the size of India’s population that falls under the millennial generation, the company may not be able to keep this product out of India for longer periods of time.

The TV, as explained earlier, seems targeted towards the millennial generation who is a regular consumer of content available on the web. As a matter fact, the sales figures of smart TVs are steadily bypassing those of normal TVs. Keeping these points in mind, Samsung has made this TV into a device that offers ease of viewing mobile content on a big screen.

Samsung Sero is powered by Bixby voice assistant. The company says that this TV also doubles up as a photo frame or a music visualizer when not in use to view content. The Korea based consumer electronics giant has equipped it with 4.1-channel, 60W speakers and an pre-fitted navy stand.

OnePlus Will Continue Selling Smartphones With Amazon in India: Report