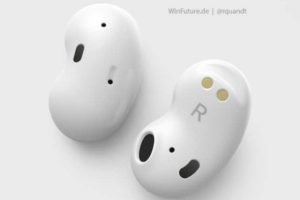 According to a report by a leading daily, the first leaks of the new Samsung Galaxy Buds are shaped uniquely like beans.

The new design leak dropped in less than two months after the latest Galaxy Buds+ which launched alongside the Galaxy S20 series.

Now, a new report suggests that the bean-shaped buds will bring active noise cancellation at about $140 (about Rs 10,639).

As per a new report from SamMobile, the new Samsung beans will feature active noise cancellation along with battery life that will last for 11 hours. However, it is unlikely that Samsung will let the new bean buds eat out of the Galaxy Buds+ market. As a result, we could maybe see a drop in the price of the Galaxy Buds and Galaxy Buds+ after the new beans are launched.

The most obvious observation is the new shape. The new Galaxy Buds resemble kidney beans. The renders by German site WinFuture are actually based on 3D design data used to manufacture the new earbuds. Samsung is currently in the Engineering Validation Test phase. However, the design could still change a bit before the product launches.

The new Galaxy Buds feature a very small design with that shape. Unlike the usual stem-shaped and stem-less designed buds, these will stay put comfortably inside the ear. The buds will likely not have any protrusion either.Moreover, the replaceable silicone tips on the Galaxy Buds and Buds+ have been replaced by a plastic universal design.The new design will directly fit into the ear canal, similar to the Apple AirPods and Huawei’s FreeBuds 3. The new design could also possibly take a hit on the noise isolation offered by the earbuds.

The Rubber tips provide a tighter ear canal seal, hence easily being able to block out ambient noise. The new design might struggle with that. However, what Samsung will likely fix this with is a combination of software and ambient data collected via the microphones on the buds.