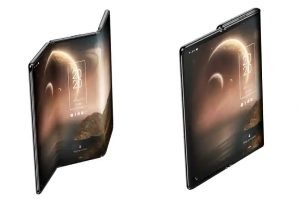 TCL announces folding smartphones in the market. Global giants like Samsung, Huawei and Motorola have already launched foldable smartphones. While the previously launched phones have been inward or outward folding, these companies have also pushed flip form factor. TCL is currently showing the future of foldable devices with its triple folding device. The device also joins the slide out device that appeared last month. Now, the company has confirmed that its foldable device has gone way past its prototype stage.

All you need to know

TCL first revealed about its triple folding phone in October last year. Initially, it had a working design but the screen did not really work well. Almost six months later, TCL is once again showcasing the prototype device with a working screen.

The “DragonHinge” mechanism is the highlight of the device which allows the triple fold to work well. The Chinese electronics company seems to have made greatprogress with the hinge as well as the display.

The triple folding phone, when fully opened, might transform into a 10-inch tablet. Unlike the Galaxy Fold, which opens into a 7.3-inch canvas, the TCL design can be dubbed as a proper tablet experience. The real beauty of the hinge is that one can fold so that only two screens are open.

The DragonHinge is also considered to work at different angles. It could also be used as a smartphone with a screen size of 6.65 inches.

All the three screens have their own batteries which also makes TCL’s triple folding device thicker than other foldable smartphones in the market. According to the report, the device would be run by Android and adjusted to “each screen opening and closing, but a lag was noticeable when switching modes”.

The report also further revealed that the device is not yet ready to compete with the likes of Samsung Galaxy Fold or the Huawei Mate Xs.  This triple folding device is at an experimental stage. Other experimental include a clamshell device and a slidable device with rollable AMOLED display. The model also uses a motor to extend its 6.75-inch display to a larger 7.8-inch screen.

TCL has not yet revealed a timeline for the launch of these foldable devices. It has also been noted that the company is ahead of its rivals in terms of concept and prototype even if it has not released a working device yet.  However, it is not confirmed whether TCL will be able to procure display needed to make these designs possible in real life.