The China-based smartphone brand, as per Anshika Jain, research analyst, Counterpoint, is looking to focus on its own e-commerce portal for selling smartphones in the country 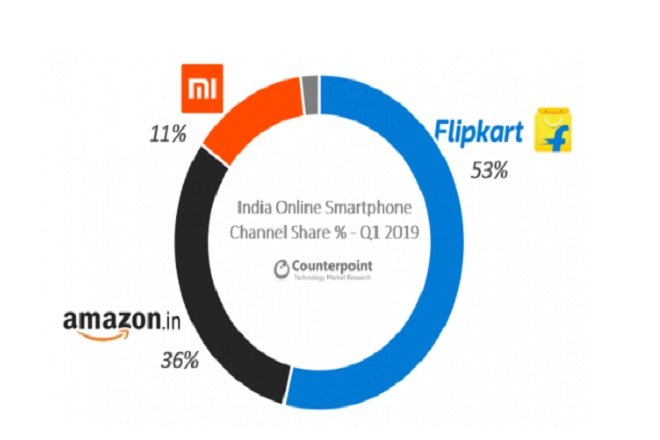 Smartphone Shipments from the online channel reached its highest ever share of 43 per cent during Q1 2019, according to the latest research from Counterpoint’s Market Monitor service. Online channel shipments grew 17 per cent year-on-year (YoY) in Q1 2019 driven by new launches, sales events, and lucrative offers rolled out during the quarter. The news for offline segment is not that great as sales through the same declined four per cent.

Anshika Jain, research analyst, Counterpoint, stated, “Price cuts of popular devices and more launches drove online channel shipments to the highest ever level In Q1 2019. Xiaomi’s Redmi 6A, and Note 6 and 7 series, Samsung’s online exclusive M series, Realme 3, Honor 10 Lite, and Asus Zenfone Max Pro series were the major contributors for the growth of the online segment. The high online channel share indicates that the new e-commerce policy has limited impact, and e-commerce giants have found a way to cope.”

Commenting on Mi becoming the third biggest online portal in terms of smartphone sales, Anshika Jain told Electronics For You that Xiaomi has been maing a lot of efforts to drive sales from its own website in India. Interestingly, e-commerce portals like Snapdeal and Shopclues have been operating in India far longer than Mi.

Jain said, “While Xiaomi may continue to be present on the likes of Flipkart and Amazon, it will try to have more sales coming through its own website in India.”

Getting rid of the excess inventories

Counterpoint shared that smartphone brands took advantage of their strong online reach to get rid of their excess inventory, before the change in India’s e-commerce policy in February 2019. Along with this, offline channels were still holding inventory accumulated during the record festive season in the last quarter of 2018.

Commenting on the brand performance, Tarun Pathak, associate director, stated, “This quarter we have seen brands adopting a hybrid channel strategy to gain market share. Key brands like Xiaomi, Realme, OnePlus have started expanding offline, which reduced some of the dependency of these brands on online channels. Meanwhile, Samsung, traditionally strong in offline channels, focused on expanding in the online market with its M series on Amazon.

Pathak expalining the importance of offline expansion said, “Offline expansion is a key strategy for the growth of these players. Having said that we believe that the online channel will continue to hold significant importance in a price-conscious market like India.”

As a matter of fact, the likes of Xiaomi and Realme have been doing everything possible to expand as much as possible in the offline network. While Xiaomi has been busy opening Mi Home Stores in India, Realme has also been on offline expansion spree in India.

BBK owned Realme had recently said that it is looking to expand its offline sales channel to 150 cities in the year 2019. It had also stated that it was present in 10 cities across the country in January 2019.

Market at a glance

Samsung adopted online flash sales strategy for the first time with Amazon on the Galaxy M10 and M20 models, increasing Samsung’s online share to 15 per cent in Q1 2019 with 31 per cent YoY growth in the online segment. The initial demand for M series was strong due to which Samsung’s online contribution within its portfolio reached its highest ever level.

Realme 3 made an entry into the top ten online models’ category driven by its aggressive specs and online promotions. Six out of the top ten models were from Xiaomi. Redmi 6A was the best-selling device in Q1 2019. It received multiple price cuts on online channels during the quarter.

The Rs 15,000 to Rs 20,000 segment was the fastest growing price segment in the online market in Q1 2019, driven by Xiaomi and Huawei. Xiaomi Redmi Note 6 Pro was the best performing model in this price band followed by HONOR 10 Lite.