The Korea-based electronics and smartphones giant had first introduced A Series smartphones in March 2019. Samsung said that it is confident of making A Series a USD four billion brand by the end of 2019 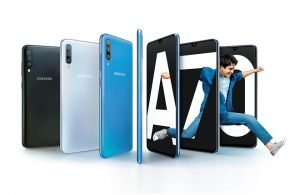 Samsung has added one more smartphone to its recently launched A Series in India. Dubbed Galaxy A70, this latest smartphone from the house of Samsung features a triple rear camera setup and a 32 MP camera at the front.

The list of Samsung A Series smartphones now include Samsung A10, A20, A30, A50, A70 and A80. Several media reports have also suggested that Samsung is also working on Galaxy A40 smartphone.

Interestingly, this flurry of smartphone launches by Samsung has come after a IDC report that had said that Xiaomi had led the Indian smartphone market for six consecutive quarters in a row. Samsung started this year by launching M Series and has been launching smartphones in the A Series as well.

500 Million in sales from A Series

Ranjivjit Singh, SVO and CMO of Samsung India mentioned that the company has raked in USD 500 million in sales from Galaxy A Series devices. It is to be noted here that the Korea-based electronics and smartphones giant had first introduced the A Series in March 2019.

Singh said, “Our recently launched Galaxy A line has seen an unprecedented success since its launch. It has reached a milestone of USD 500 million in sales within 40 days of launch. We are confident that we will make Galaxy A line a $4 billion brand by the end of 2019.”

Galaxy A70 has a 4500 mAh battery that supports 25W super-fast charging. The company has also equipped it with Samsung Pay which enables consumers to carry their wallet on their phone. It comes equipped with a 6.7-inch FHD+ Infinity-U super amoled display.

This latest Samsung A Series smartphone features a 32MP triple rear camera setup. The camera setup consists of a 32 MP low-light lens with f/1.7, an 8MP Ultra-wide lens and a 5 MP depth lens. There is a 32MP front camera on the front. The smartphone is powered by a Snapdragon 675 processor coupled with 6GB RAM.

“We are witnessing a change from an era of static to an era of live and Galaxy A70 is built for this era of live which allows them to capture experiences, connect and share it with the world in real time. With its best in class display, revolutionary Samsung Pay, path breaking triple rear camera and top notch processor, the newly launched Galaxy A70 is all about experience. I am sure our consumers will be delighted with this ultimate powerhouse,” Singh added.

Blue Star Plans to Spend More on Brand Building in 2019

5G Phones Forecast to Account For Half of Smartphone Sales: Gartner