The smartphone market is on the decline because of lack of innovation. Will smart TV industry meet the same fate once it reaches saturation point?

Smart TVs are selling like hot cakes in the market. These come equipped with abilities that have transformed the way people watch TVs all over the world. The use of features like Artificial intelligence (AI) and Machine Learning (ML) have made these do what once was considered impossible.

But is there a possibility that the smart TVs will meet the same fate as smartphones? A lot of reports published recently claim that the global smartphone market is on a slowdown for last few years. Markets such as US and China, which are also considered as the hub of innovations, are also struggling in terms of smartphone sales.

Reasons cited by most of these reports have one thing in common – lack of innovation. Tarun Pathak, associate director at Counterpoint Research, in one of the company’s report said, “Smartphone OEMs tried to push sales by adding features such as AI, multiple camera assemblies, full-screen displays, in-screen fingerprint scanners, etc. But consumers held on to their devices longer due to the absence of ground breaking innovations and higher prices of devices being offered by the OEMs.”

A report published by IHS Markets said that the global unit share of smart TVs rose from 45 per cent of total TV shipments in 2015 to 64 per cent in 2017. Several other reports have time and again forecast that smart TVs will outshine shipments of normal TVs in the coming times.

Avneet Singh Marwah, CEO, SPPL, Brand Licensee of Kodak TVs in India, told EFY-ACE, “The smart TV market share in India is 78 per cent. Though the bigger share is enjoyed by the online channel, the day is not too far away when the offline channel will also enjoy an almost equal share of smart TV sales and shipments.” He also said that the company is working hard on embedding AI and ML in its new range of smart TVs, which, according to him, will hit the Indian markets in six months’ time.

But what happens when almost every user switches to smart TV? That will be the time when innovation, in terms of smart TVs, will define which consumer electronics company does how much business.

Faisal Kawoosa, founder, Techarc told EFY-ACE, “It seems that innovations in terms of smart TVs are happening only in terms of making them last less longer. Despite making the TVs smarter, a lot of companies seem to be focusing upon prices. We may see the smart TV market stagnating in the next five years as it gets more matured in the country. The lack of innovation in making these smart will be one of the major reasons behind the downfall.”

What is the current generation of smart TVs capable of?

Many consumer electronics companies have launched smart TVs that are capable of streaming content from internet. These come with in-built video streaming apps that use a wi-fi connection to stream content. The point to be noted here is the fact that the same can be done without even owning a smart TV.

TVs with compatibility to work as computer screens are not at all a new thing in the market. One can simply connect his laptop or computer to the TV and play his choice of the content on the same. In fact, unlike a lot of smart TVs that do not permit casting content from two competitors, a user can easily cast content from any provider by pairing his computer to his TV screen.

The next, in terms of smart TV innovations, came the ability to cast one’s smartphone screen over the TV’s display. However, the limitations of these are also widely known. Even though companies are claiming to have used Artificial Intelligence and Machine Learning, nothing substantial has been really done in making these TVs smart. After all we cannot just call a device smart if it is able to cast smartphone screen or is able to stream content through Wi-fi.

Interestingly, online streaming apps that a lot of smart TVs come in-built with, are much smarter than the TVs. These apps use AI to understand the type of content a user prefers and shows a list of possible genres that the user might be interested in watching.

The answer is a definite ‘yes’. The best smart feature that TV companies can work upon is the one found in content streaming apps. Embedding smart TVs with algorithms and AI that read what a user is watching and use the same to browse through all the content available on the internet, in order to show similar genre shows and movies, can work wonders for TV companies. While an in-built app is only able to browse the list of its own content, an AI algorithm that also learns with time will be able to browse content available on the all the apps downloaded on the smart TV. 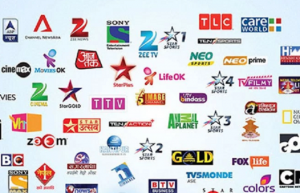 The Government of India has re-written the rules for cable and DTH TV service providers in the country and a lot of TV viewers are finding it difficult to select channel packs that are both economical and best for their viewing needs. What if smart TVs come embedded with an AI algorithm that can suggest pack suggestion based on what channels the user has viewed in the past?

This feature will require the AI to browse through the websites and rate lists of all the channel providers in order to suggest the same. However, doing so will not only be a true test case of using AI and ML in smart TVs, but this might also lead to a long-lasting positive impression of the TV brand in the heart and mind of consumers.

AI that works on picture quality 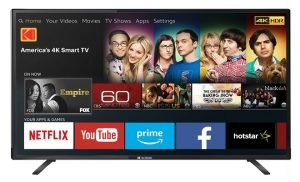 Giving an example Ashiwini Kumar Sinha, AI and ML enthusiast, said, “Consider you are watching an Indian Premier League match. The batsman is hitting the ball hard and the only time you are able to catch a glimpse of the ball is when it slows down. Now what AI can do here is recreate the ball using algorithms so you can see it hitting the bat and travelling to the boundary rope in real time, frame by frame.”

He added that not only in live cricket, but AI can actually be used to improve the quality of feed received through the TV network. It can then be telecast with much better contrast and colours on the TV screen.

Recording shows on its own 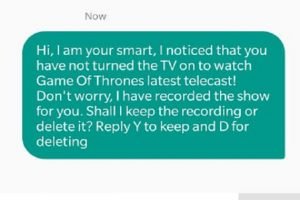 A lot of users get hooked to a show series and watch it week after week as new episodes get broadcast. The ability to record live shows while watching them is not at all a new feature, so is remotely commanding a smart TV to do so. But what if TVs could get smart and record shows based on what the user is interested in watching.

For example – If a user has watched eight episodes of a new daily soap on TV, but has not turned on the TV to watch the ninth episode telecast, the TV can record and send a message saying, “I noticed that you missed a show you watch every day, so I recorded it. Will you like me to keep the recording or shall I delete it?”

Time for an in-built camera 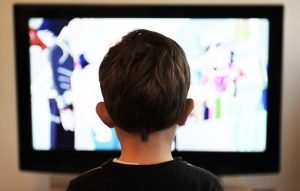 Though a few companies have started announcing TVs with built-in cameras, this technological advancement in smart TVs in India is still rare. An in-built camera can not only help make video calls to friends and family, but it can do a lot more things based on AI and ML algorithms fed in the system.

A general problem that an in-built camera can easily solve is showing content titles based on the person viewing it. Facial recognition can easily differentiate between a kid and adults switching a TV. Not only can the parents set dedicated time for their kids to watch TVs, but they can easily control the genre of content that they do not want their kids to be watching.

Though the feature is accessible by creating different user profiles, kids still outsmart these smart TVs by entering passwords of their parents. An in-built camera, embedded with facial recognition feature, will completely remove the need for passwords.

Similarly, the camera, through facial recognition feature, can also create individual user profiles and show possible genres and titles each viewer watches the most.

The AI features mentioned here have been suggested by Ashwini Kumar Sinha, who apart from being an AI and ML enthusiast, makes awesome DIY projects for EFY Group. You can find some of his works here.

Apple India’s FY19 Profit Down 70 Per Cent Amid Low iPhone...