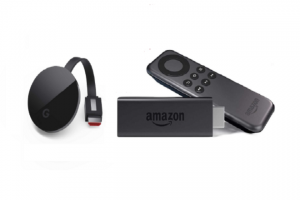 It seems as if the growing popularity of video content streaming dongles in the world has led Google and Amazon to collaborate. The duo have agreed to allow each other’s content services to be streamed on the TV dongles these offer in the markets.

An official statement released by Amazon read, “Amazon and Google announced that in the coming months, the two companies will launch the official YouTube app on Amazon Fire TV devices and Fire TV Edition smart TVs, as well as the Prime Video app for streaming to Chromecast and Chromecast built-in devices. In addition, Prime Video will be broadly available across Android TV device partners, and the YouTube TV and YouTube Kids apps will also come to Fire TV later this year.”

The experts speak out

Himanshu Jain, senior market analyst, IDC India, told Electronics For You, “The TV dongles as well the video content streaming market has started consolidating. Both Google and Amazon have made a very smart move by collaborating. Sales of third party TV dongles, may see a decline now. This move also has the potential to increase sales of Google Chromecasts and Amazon Fire TV Sticks.”

Jain continued, “It is of no point spending so much in creating so much content and then barring the same from being streamed on some devices. Amazon and Google seem to have learnt that the profits will only increase when the audience watching the content increases. Amazon Fire TV Stick and Google Chromecast are among the top-selling TV dongles not only in India but also in the world.”

Faisal Kawoosa, founder, Techarc feels that the move might not help in increasing sales of the devices. He said, “It is for the benefit of existing users that they don’t remain so to say deprived of one of the contents for choice of dongle they already have invested in. Secondly, it would make the decision of prospective buyers easy. But the issue it emanates is, where is then the uniqueness of content.”

TV dongles, after the entry of smart TVs in the market, are one of the most selling devices. People who own normal TVs, and do not want to invest on a smart TV, prefer to spend less money on such TV dongles. In simpler words, TV dongles are an economical and easy way to convert a normal TV into a smart TV.

Meenakshi, forecast analyst, Forrester India, pointed out that this might be Amazon’s and Google’s strategy to strengthen their positions outside US market. She said, “Google and Amazon are competing against each other on so many different levels. But as the competition in the smart TV dongle as well as video streaming services is increasing day and night, it would not have been possible for the duo to follow the same old strategy at least in this domain. This collaboration by Amazon and Google was inevitable, expect more to follow suit.”

Jain added, “Prime has clear edge over Google in terms of content, so to leverage on that, Google is turning friends with Amazon rather than Apple, who have a long history of conflicts.”

“We’re excited to bring the Prime Video app to Chromecast and Android TV devices, and to give our customers convenient access to the shows and movies they love,” said Andrew Bennett, Head of Worldwide Business Development for Prime Video.

A recent report by Boston Consulting Group (BCG) had forecast the over-the-top (OTT) video streaming market in India to touch $5 billion by 2023. The report had pointed rising affluence, increase in data penetration in rural markets and adoption across demography like women and older generations, as reasons that are driving this growth.

Kanchan Samtani, partner and director, BCG, said, “Majority of India consists of single TV households. Affordable data has created an alternative medium where consumers, for the first time, can tap into content on the basis of an individual’s preference at a time and space convenient to them. While the current market operates with a largely advertising paid content paradigm, consumers are not averse to paying for the convenient content access that OTT unlocks.”

Heather Rivera, global head of product partnerships at YouTube (Google), said, “We are excited to work with Amazon to launch the official YouTube apps on Fire TV devices worldwide. Bringing our flagship YouTube experience to Amazon Fire TV gives our users even more ways to watch the videos and creators they love.”