The government is focusing on initiatives such as ‘Digital India’, ‘Make in India’ and ‘Foreign Direct Investment’. It has placed electronics manufacturing on high priority 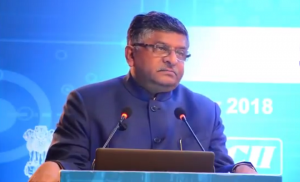 Ravi Shankar Prasad, Union IT and Electronics Minister, India on Friday said that the new draft on India’s electronics national policy would soon be taken up in the cabinet. Speaking at the first edition of Electronics Summit organised by the Confederation of India Industry (CII), he clarified that the draft for the policy will be finalised soon.

India as the new hub of electronics manufacturing

Prasad, while addressing the media, stressed that the new national electronics policy would help make India a hub of electronics manufacturing. He pointed out that the policy will help Indian electronics industry to serve domestic as well as global markets.

An official CII statement quoted the minister saying, “The draft National Policy on Electronics 2018 which has undergone wide consultations so far will be finalised and taken up by the Cabinet very soon.”

A tweet by the CII read, “Government is pushing the country for $1 trillion digital economy. With the focus on export-oriented initiatives in electronics, the new Electronics Policy will help making India a hub of Electronics Manufacturing to serve domestic and the global markets.”

Indian Cellular Association, earlier this year said that the annual production of mobile phones in India had increased to 11 million units in 2017. The production in 2014 was around 3 million units.

India’s Union IT and Electronics’ Minister said that the government has placed electronics manufacturing on high priority. The government is focusing on initiatives such as ‘Digital India’, ‘Make in India’ and ‘Foreign Direct Investment’.

Rajiv Kumar, NITI Aayog Vice-Chairman said, “In next two decades, we need to scale the growth to 25-30 per cent. While value addition is important, we also need to scale up, for which export figures and ambitious targets are more important. The industry must aspire to become $150 billion industry in the next five years,”

Another tweet by Prasad read, “Medical electronics, defense electronics and automobile electronics have tremendous potential for future growth as far as electronics manufacturing in India is concerned.”