Sharp India, keeping an eye on the consumer electronics sales during India’s biggest festive season, yesterday announced the launch of new home appliances and a commercial air purifier at a launch event held in New Delhi. Kishlay Ray, president, home appliances, Sharp India, in an exclusive conversation with EFY Group shed light on company’s strategy for the upcoming festive season in the country.

The company this year onward will start focusing on omni-channel strategy in India. Kishlay Ray shared that Sharp India will reach consumers via all channels here. The company is aiming to achieve revenues of Rs 70 crores from festive sales in 2019. As a matter of fact, Sharp India’s presence was more in the offline channel when compared to the offline channel.

He added, “We are expecting 50 per cent growth in the sales this year. While sharing a definite number will be difficult at the moment, all I can say is we aim to at least retail consumer electronics worth Rs 70 crores in the country.”

It is to be noted here that online channel including the likes of biggest e-commerce players in India had racked in their highest sales ever in the country last Diwali. The likes of Amazon, Flipkart and Snapdeal had sold record number of consumer electronics last year. As a matter of fact, smartphones and consumer electronics were among the top verticals generating revenues for a lot of e-commerce players. 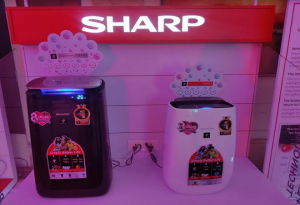 Sharp India, this festive season, is going to highlight the importance of health and difference consumer electronics make in our daily lives to potential consumers. The company gave demos of live cooking at the event and discussed around ways Sharp India’s latest kitchen appliances focus on healthy cooking.

Kishlay Ray said, “Our marketing strategy will simply focus around the ehalt aspect. Sharp India wants to convey a simple message that our kitchen appliances not only facilitate healthy cooking but also help save time. This Diwali we want to make homes healthy. People in the metropolitan cities are very busy and we want to make healthy cooking safe and easy for them.”

Stabilizer Brand V-Guard Now Has a Smart Fan in its Product...