Facebook had acquired Oculus in 2014. It has already launched Portal and Portal Plus video calling hardware products in some of its international markets 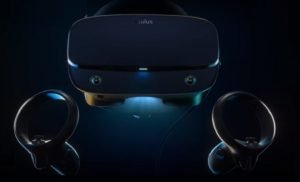 Facebook, with the announcement of Oculus Rift R VR headset, has made another move in the global hardware consumer electronics market. The new Rift S VR headset, as per the company, is developed for gamers and tech enthusiasts. The company will be retailing it for an asking price of $399 USD.

Company’s official statement read, “Built on the Rift Platform, Rift S gives gamers and tech enthusiasts access to the most immersive content that VR has to offer, and it’s launching this spring for $399 USD.”

Oculus Rift S VR headset, as per the company, will be replacing the original Rift VR headset. The social media giant had acquired Oculus in a $2 billion deal in 2014.

“We’re going to focus on helping Oculus build out their product and develop partnerships to support more games. Oculus will continue operating independently within Facebook to achieve this,” Facebook CEO Mark Zuckerberg had said so when Facebook acquired Oculus initially.

Already Launched Portal and Portal Plus in the US

The company, in 2018, had also confirmed that it was also developing AR glasses. Facebook AR head, Ficus Kirkpatrick, had confirmed about the development of Facebook AR glasses in a TechCrunch AR/VR event held in Los Angeles.

At the event, he had said, “Yeah! Well of course we’re working on it. We are building hardware products. We’re going forward on this. We want to see those glasses come into reality, and I think we want to play our part in helping to bring them there.”

Rift S, as per the company, works with the Rift platform, giving users access to the top-selling and most immersive VR titles on Day 1 – and even more groundbreaking games like Asgard’s Wrath, Defector and Stormland on the horizon. Oculus said that it has collaborated with Lenovo in order to design Rift S headset.

Oculus’s official statement read, “We partnered with Lenovo™ to design Rift S, drawing on their experience in the VR and AR space and feedback from the Lenovo Legion™ gaming community. Lenovo co-designed the Rift S for increased comfort, better weight distribution, and improved light blocking, as well as a simple, single-cable system for a clutter-free experience.”

The Rift S headset, as claimed by the company, features five sensors to track volumes in support of the existing Rift library.

Havells Plans to Boost Business with Rs 1,500 Cr Investment by...