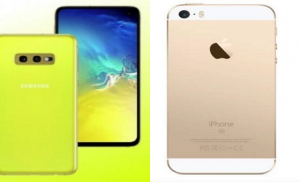 It seems as if the biggest smartphone brands of the world are running out of strategies to fuel sales of their flagship smartphone models. Samsung, a Korea based brand, that launched its latest S10 flagship smartphones range yesterday, seems to have borrowed a trick or two from the books of its rival Apple.

Samsung introduced the new Galaxy S10 smartphone series to the world yesterday along with their prices. The company’s Senior Vice President of Product Marketing (America), Justin Denison, kicked off the Samsung foldable smartphone event by introducing the world to the Galaxy Fold. The opening keynote and proceedings by Denison, seemed a lot similar to the way Steve Jobs used to address people at Apple iPhone launch events.

It is worth mentioning here that Apple iPhone 5C and SE were introduced as the affordable iPhone models by the Cupertino based smartphone brand. Similarly in the S10 flagship smartphone range, that starts from Rs 66,900 and goes up till Rs 1,17,900, the Samsung Galaxy S10e makes for the affordable version at Rs 55,000.

Apple’s launch of iPhone X models had marked the beginning of a new category that many research organisations called as the luxe segment in smartphones. The iPhone XS is currently available from a starting price of Rs 1,09,000 for the 64 GB version. These prices go up till Rs 1,44,900 for the 215 GB version.

Many reports have said that the new strategy of Apple may not be working as the number of iPhone models its sells annually have been on a slow down after the arrival of its iPhone X. However, its revenue figures clearly stat that despite selling less number of iPhone models, the company’s profits have remained almost constant.

It may also be a big possibility that Samsung is trying its hand at the luxe segment with launch of new Samsung Galaxy S10 devices. Samsung has priced the 512 GB and one TB versions of the Galaxy S10+ smartphones at Rs 91,900 and Rs 1,17,900, respectively.

Though the Korea based smartphone brand may has tried to position the Galaxy S10 smartphone series between the iPhone X, iPhone XR and iPhone XS models, the stark similarities between Apple and Samsung launching affordable and expensive phones in the same series are fairly evident. As a matter of fact, what Apple tried to do with iPhone SE and iPhone 5C is what Samsung seems to be trying now with Samsung S10e.

The Rise of Private Label Consumer Electronics Brands in India