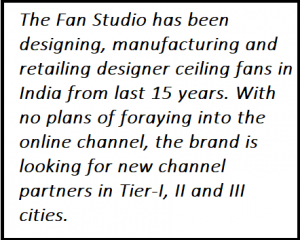 Here are some more excerpts from the conversation

ACE – How would you explain the Fan Studio to a new channel partner?

Everything in respect to designer ceiling fans that we retail, is done in India. We have two manufacturing units here. Every trade partner who is associated to us or who wants to associate with us, gets all the support he/she needs. As we are the original manufacturers of designer ceiling fans, the margins are good enough for keeping everyone going!

The Fan Studio started retailing designer ceiling fans in India about 15 years ago. We started with one physical store in India and now have 13 in the country. Some of these are directly handled by the brand, while some are on the franchisee model. It is the brainchild of our managing director Shishir Kumar Sah.

ACE – How was the market for designer ceiling fans 15 years ago and how is it now?

PS – The USP, the Fan Studio has, is in its manufacturing, marketing and retailing skillset. We do not source anything from anywhere when it comes to manufacturing designer ceiling fans. All the products that we retail are manufactured here in India.

When we started 15 years ago, the market was hesitant to try out designer ceiling fans. The starting prices of products we were retailing were Rs 15,000. Normal ceiling fans, on the other hand, were being retailed for maximum prices of Rs 2,000 back then.

The difference that we made back then, and continue to make today, is designing and manufacturing ceiling fans as per the needs of architects, interior designers and in some cases end consumers as well. Initially, we started with around seven to eight designs and now we have around 50 to 60 designs.

The market for designer ceiling fans is getting matured. The demand, as well as the design needs, are increasing.

The market for designer ceiling fans is completely different from what it used to be in 2007. It is growing and going beyond the niche audience. Coming back to your question, the response from channel partners, as well as end-consumers has been very good in comparison to the initial years.

We have not diluted designer ceiling fans into normal fans till now. The channel partners that we have work with very famous names of the furniture, architects and interior designing industry. The clientele that we cater to includes premiums hotels like Taj and Novatel. The Fan Studio also serves various ministers and celebrities from the Bollywood industry.

ACE – Are you looking for new channel partners in India?

PS – Earlier, we used to associate with channel partners dealing in premium-end consumer electronics. Now, apart from these we are also trying to on-board channel partners who have been in the business of home appliances and even normal ceiling fans.

The prime reason behind the same is the growth in the market for designer ceiling fans. The Fan Studio is currently looking to tie-up with A+ counters in India. The market is growing very rapidly. We are witnessing demand for our products from all the sections of the society. We are in search of channel partners who can take our products to all the sections of the society.

ACE – What about online and offline channels?

PS – We are not present in the online channel. The Fan Studio has no plans to foray into the online channel anytime soon. The reason behind this lies in the fact that we usually custom-make designer ceiling fans.

Most of the times, the products that we showcase, are ordered with modifications by our clientele. This is where our channel partners have a bigger role to play. Change of colors, types of blades, quantity and everything else related to our products are conveyed to us by them. This is simply not possible through the online medium.

ACE – If not in the online space, where are you planning to expand?

There’s no rule of thumb that a channel partner needs to be able to connect with architects, interior designers or high-profile people. If a trade partner can cater to the growing demands of designer ceiling fans across different verticals of the society, that is good enough for us.

Author – Mukul Yudhveer Singh. An avid reader, Mukul finds peace in books and technology. He’s as passionate about writing as he is about cricket and Playstation. If not writing or reading, you will most likely find him drawing tattoo designs or analyzing political campaigns.