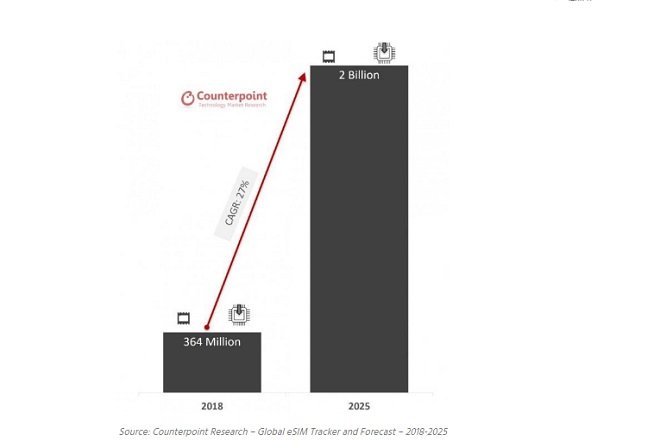 Shipments of eSIM-based devices will reach almost two billion units by 2025, up from 364 million in 2018, according to the latest research from Counterpoint’s ETO (Emerging Technology Opportunities) Service. This will be mainly due to smartphones and enterprise IoT devices. Our findings also show that a majority of eSIM-based devices will have a hardware chip based eSIM solution until 2025, and after that, we will see a rise in the adoption of integrated SIM-based solutions.

Commenting on the market demand for eSIMs, Counterpoint research analyst, Satyajit Sinha, noted, “The growth of eSIMs will revolutionize how the connectivity across the devices will be activated and managed. The eSIM’s compact form factor offers significant space reduction for device manufacturers along with potentially higher security, re-programmability, and power efficiencies over the traditional SIM card solutions. For operators, eSIMs can significantly reduce the SIM distribution and activation costs while the potential to generate higher roaming revenues. Furthermore, eSIM offers great benefits for consumers and enterprise customers to seamlessly choose, activate, connect, and manage connectivity on their devices.”

Adoption of eSIMs in smartphones should also drive the major volume growth with the adoption of eSIM by top players such as Apple, Google. Other connected devices such as mobile hotspots, routers, connected PCs, drones, and smartwatches though will grow at a higher CAGR due to a relatively smaller base of adoption right now. However, in terms of shipment volumes, smartphones and B2B IoT devices will lead.

Shah, further added, “The initial eSIM solutions in smartphones over the last four years have been proprietary soft eUICC (eSIM) mostly driven by Chinese OEMs in China before Apple and Google adopted GSMA compliant hardware eSIM. However, we will see a shift in adoption to the GSMA compliant hardware-based eUICC for next five to six years alongside integrated SIM or iUICC within system-on-a-chip (SoCs) across different device categories, replacing the less secure proprietary soft eSIM solutions. While hardware-based eUICC will be popular across smartphones, automotive, we believe iSIM or iUICC will be popular across IoT applications.”

Our Products Aim to Meet Growing Demands of the Middle-class: Skyworth