The grand finale of Oppo Pubg Mobile India Tour witnessed two days of intense gaming sessions with Team ‘Revenge eSports’ emerging victorious and walking away with the prize of Rs 50,00,000. The total prize pool that Oppo sponsored was Rs 15 million.

“We have observed a huge paradigm shift towards smartphone gaming in India. Taking this into consideration, Oppo has been developing innovative features to enhance the overall gaming experience. Oppo Pubg Mobile India tour is an ideal platform for us to show our commitment and meet the needs of millennial. The platform provides Oppo an opportunity to interact not only with the millennials but also with serious mobile gamers to understand their requirements and develop our next wave of innovations,” shared Sumit Walia, VP, Product & Marketing, Oppo India.

BBK, the owner of Oppo, Reno, Vivo, Oneplus, Iqoo and Realme smartphone brands, has had a long partnership with global sports events and teams in the recent past. A report by Canalys Research said that Vivo, Oppo and Realme, together shipped 8.6 million devices in Q1 2019.

The number of devices shipped by OnePlus are not added to the number. These 8.6 million devices shipped, technically make BBK the second top player in the list to ship most devices.

Focus on youth as target audience

The smartphone brand has recently signed a multiyear partnership with Riot games. It is now the exclusive official global smartphone partner for League of Legends esports international event.

“As a consumer-centered brand, Oppo always seeks the right way to communicate with young people, our target audience. This is a great move for Riot and Oppo, the partnership will allow us to continue to strengthen our bond with the young as we join them in celebrating the victory of each game,” said Brian Shen, Oppo vice president and President of global marketing.

Oppo had recently renewed its sponsorship tag with Barcelona Football Club as well. Similarly, Oppo has recently signed up a sponsor with Wimbledon Tennis tournament. This tournament is considered as the world cup for tennis players. Apart from outdoor games, BBK has been advertising with Pubg online game as well. BBK’s Oppo and Vivo have been sponsoring Pubg tournaments since last one year in India. 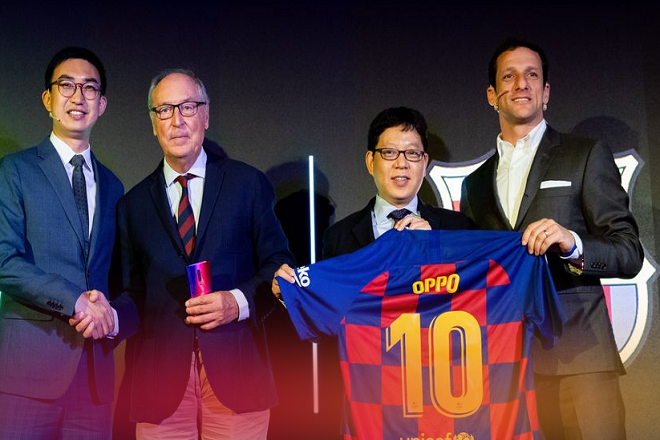 Marketing and advertising: All guns blazing

The company had recently announced its collaboration with Bollywood celebrities Ranbir Kapoor, Rapper Badshah and Katrina Kaif. This trio was last seen promoting Oppo Reno 2 smartphones in a video commercial.

Ranbir Kapoor, Katrina Kaif, and Badshah, as per the company, will serve as the catalyst of the Oppo Reno series in the Indian market. With Oppo’s omni-channel marketing strategy, the integrated campaign is already live across TV and digital platforms like Facebook, Twitter and YouTube.

Apart from Oppo being a sponsor of the Indian cricket team, Vivo has been a sponsor of Indian Premier League as well. It is to be noted here that IPL is one of the most watched cricket tournaments in the world.

Share in India’s Smartphone Market at 21.4 per cent: Vivo