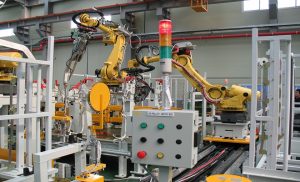 TCL has announced the setting up of its manufacturing facility in Tirupati, Andhra Pradesh. This will be the Chinese consumer electronics company’s first deal with India. A Memorandum of Understanding (MoU) was signed between the IT, Electronics and Communication (IT, E and C) department and TCL in the presence of IT minister Nara Lokesh and Kevin Wang, CEO, TCL.

TCL’s decision to set up its unit in Andhra Pradesh has come after Flextronics’ recent investment in the state. Highlighting the fact that AP has been growing as an electronics manufacturing hub, the IT minister said that the government had been introducing policies and special incentives in the manufacturing sector. The aim was to attract investors across the country and world and large, medium and small-scale manufacturers.

Andhra Pradesh is the only state in India to house three electronics clusters. The minister added that the goal was to make India known for both assembling and manufacturing of electronics goods. The state has plans to add another tag – electronics designs to its profile. Speaking on the occasion, he talked about the three units that were based on Design-To-Death model. This model covers the lifecycle of a product. The units design, manufacture and work on e-management of the electronics products.

TCL’s new unit aims to enhance manufacturing of electronics in India. The company portfolio boasts of being a major television manufacturer in the world. It produces around 80 lakh TV panels and 3 crore mobile units per year. The Chinese major also deals with appliances like washing machines, air conditioners and refrigerators among others. It also engages in research and development, besides manufacturing and distributing consumer electronics products.

The global TV maker recently introduced its new artificial intelligence (AI) TVs with an aim to build an ecosystem for smart TVs.

Xiaomi pushes for smartphone component suppliers to invest in India