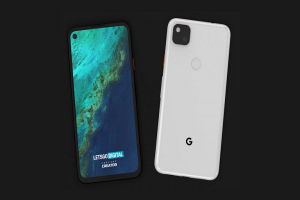 The software giant Google seems to be working on an updated version of it Pixel 4A. The company has not revealed any information about the Pixel 4a in an official capacity. The new phone is expected to have an expensive price tag.

According to SlashLeaks, the leaked images for the Google Pixel 4a showcase both the front and the backside. The smartphone features a punch-hole design on the top left corner of the device. Also, the product has a thin outline of bezels on all sides of the display, and the report suggests that the phone could feature a flat 5.7-inch or 5.8-inch LCD panel display.

Moving to the back, we get a dedicated fingerprint scanner along with what appears to be a single-lens camera, Google seems to have integrated the same square module camera setup as the Google Pixel 4. The phone also spots a “Google” logo on what appears to be a plastic rear panel.The phone is reported to measure 144.2×69.5×8.2mm in size, and if we include the camera bump, the thickness increases to 9mm. However, there’s no clarity whether Motion Sense will be integrated on the Pixel 4a series, or not.

Going through the renders, Google likely seems to be running for the design unification. As per previous rumors, the phone will also feature a 3.5mm audio jack along with a USB Type-C port.

Realme X50 5G to Have Over Two-Day Battery Life: Report