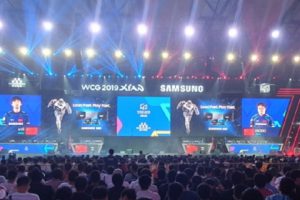 Samsung Electronics SSD will be participating in the games show China Joy in August, as well as the Tokyo Game Show this September, two games shows that make up half of the top four global game industry events. At these two events, Samsung Electronics SSD will also set up exhibition booths for visitors to enjoy a series of events, video streams and pro-gamer competition matches.

The company, through an official statement, said that it is pursuing these partnerships with global gaming shows due to the suitability of their Solid State Drives (SSDs) for the gaming industry. On top of its official sponsorship of WCG 2019 (World Cyber Games), Samsung operated a 595 square meter Samsung Exhibition at the event for visitors to explore.

BBK has done it earlier

China-based BBK, through its smartphone brands Oppo and Vivo has already sponsored Pubg game events in the world. It is to be noted here that Pubg is one of the most played online games in the world. Interesingly, it can be played both on smartphones as well as computers.

BBK owned Oppo had recently announced its continuing sponsorship of the Tencent PubG Mobile India Tour. The company had also sponsored a prize pool of Rs 15 million for the tournament. Charles Wong, CEO, Oppo India and President Oppo South Asia, said, “As the gaming trend is continuously increasing among the youth, Oppo’s centre of attention is to meet the growing needs of the youth and provide them with gripping features that ensure a smooth gaming experience to enjoy games such as PubG Mobile. Oppo has been an advocate of youth participating in gaming through their partnerships with Tencent Games.”

Samsung, as per a report by IDC, remained in the second position in 2018, however with a YoY decline of 7.9 per cent in 2018Q4. The newly-launched Galaxy A7 (2018) with triple cameras picked up demand in 2018Q4 followed by its Android Go model, the Galaxy J2 Core. The brand is expected to make a comeback with its new online exclusive “M series” to be made available in February’19 via flash sales.

Interestingly BBK’s three smartphone brands Vivo, Realme and Oppo grabbed the third, fourth and fifth spot resvectively. Vivo, as per the same IDC report, continued at 3rd position with high YoY growth of 79.6 per cent in 2018Q4. Its affordable models – namely Y81 and Y71 – continued to generate maximum demand along with the flagship range of V11 and V11 Pro series.

IDC’s report read, “Realme entered the top 5 vendor list at 4th position on the back of its affordable and aggressively priced Realme 2 and Realme 2 Pro series. The brand also moved from the fourth position in 2018Q3 to the second position in the online space with a share of 17.3% in 4Q18. The brand plans to extend its footprint into offline channel initially through Large Format Retail Stores like Reliance Digital and gradually scale up to traditional brick and mortar stores.”

It continued, “Oppo continued at 5th position, with high YoY growth of 71.7 per cent in 2018Q4. The brand’s “A series” with models like the A3s and A83 generated middling demand. However, it continues to face stiff competition from Vivo in the offline channel owing to lower channel incentives and consumer schemes.”

Oppo Reduces Price of A9 2020 Smartphones in India