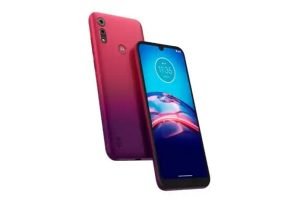 Smartphone manufacturer Motorola has launched a new version of the E6s with a new design and some downgraded specifications. The brand had launched the older Moto E6s smartphone in September 2019.

The company is yet to announce the price and other details for the new model. The latest smartphone might come in two colors, namely Peacock Blue and Sunrise Red. Perhaps the company has a major segment-reshuffling planned for its series ahead of its new phones in 2020.

A 6.1-inch HD+ resolution IPS LCD display, with an aspect ratio of 19.5:9 is what the smartphone already boasts about. Powered by a 2GHz octa-core MediaTek Helio P22 (MT6762) 12nm processor along with 2GB RAM and 32GB internal storage, the smartphone comes with an expandable memory of 512 GB via the micro SD card slot. In contrast, the earlier launched edition of the Moto E6s had 4GB RAM and 64GB storage.

As confirmed by the company, the phone might run on Android 9 Pie and will also have a rear-mounted fingerprint scanner. Talking about the camera optics, the new Moto E6s features a dual-camera setup on the back. This includes a 13-megapixel f/2.2 primary camera along with a 2-megapixel f/2.4 secondary sensor. On the front, the phone would also feature a single 5-megapixel selfie camera with an f/2.2 aperture. Further, the Moto E6s will be backed by 3000mAh battery with 5W charging.

The new Moto E6s also boasts about a water-repellant coating. In terms of connectivity, it features both single and dual SIM variants. They have support for 4G LTE, VoLTE, Bluetooth 4.2, Wi-Fi 802.11 b/g/n, GPS, GLONASS. There is a micro-USB port for charging and data transfer, and a 3.5mm headphone jack. The dimensions of the phone are 155.6 x 73.0 x 8.5 mm and its weight is 160 grams.