About 50 million tonnes of electronics waste (e-waste) generation has been estimated and half of these include PCs, screens, smartphones, tablets and TVs 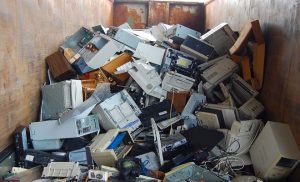 Global E-Waste Monitor, 2017, a report published by the United Nations University suggests that India generates electronics waste (e-waste) of about 2 million metric tonnes and of this, 82 per cent is covered by personal devices.

A study conducted in 2017 projected a 21 per cent increase in the volume of electronics waste in the country. It further suggested that at this rate, e-waste from old computers and mobile phones would rise by 18 per cent and that from television sets and refrigerators would have a two-fold rise by 2020.

India’s Extended Producer Responsibility (EPR) makes it compulsory to register and lay down the targets of the electronics and electrical manufacturers to manage the e-waste created and pave a user-to-recycler network. This updated e-waste management. Non-compliance of this norm has laid down a fine of maximum Rs. 1 lakh or five years imprisonment. The Central Pollution Control Board (CPCB) has provided the EPR for a five-year term to around 726 manufacturers.

India’s ranking in the top electronics waste producing nations is the fifth along with the US, China, Japan and Germany. A study conducted by ASSOCHAM-KPMG said that about 70 per cent computer equipment, 12 per cent telecom equipment and 7 per cent medical equipment contribute to India’s e-waste.

Experts have opined that lack of proper implementation of e-waste norms contribute to the rising e-waste in India. The absence of enhancing the process of electronics waste management has further added on to it.

About 50 million tonnes of e-waste has been estimated by the year-end globally. These include computers, screens, smartphones, tablets and TVs, with the remainder being larger household appliances and heating and cooling equipment.

Durable makers may not pass on higher tax burden to consumers