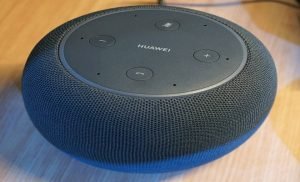 Huawei has revealed its latest AI based speaker during its Mate 20 event held in China. Strikingly similar in design to Amazon Echo and Apple Homepod, the new Huawei AI home-speaker will currently be only available in China.

Despite clear similarities in design, including control buttons on the top and a stout, the latest Huawei AI speaker has been priced at 399 yuan ($60), which is way cheaper than Apple’s $349 Homepod.

Powered by Huawei’s own voice assistant, Xiaoyi, the recently revealed Huawei AI speaker looks like a blend of designs borrowed from Amazon Echo and Apple HomePod. It’s shape, a power cord stemming out of the back clearly reminds of Apple HomePod, while the top, barring Huawei branding in the middle, looks pretty similar to Amazon Echo.

Huawei said this latest AI speaker will be available in white and grey colours.

Huawei has not revealed any plans of launching the newly revealed AI speaker in India. The speaker also does not support English or any other Indian language currently. However, given the market share and preference for low priced products in the country, Huawei may soon release a statement clarifying the launch of Huawei AI speaker here.

The earlier launched Huawei AI cube is also not available in the country.

OnePlus is Using AI to Innovate in SMS Experience